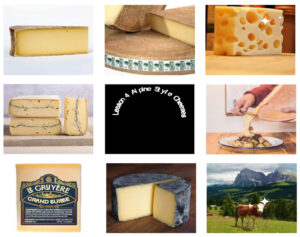 The term Alpine cheese, refers to a region of cheese making rather than one variety.
The name applies to Swiss, French, Austrian, or Italian cheeses made in the Alps with unpasteurized
cow’s milk, but for the purposes of this lesson we’re also including cheeses made elsewhere but
with the same methods. Unlike the other cheese types featured in this series they cover a wide
variety of styles and flavours ranging from nutty through to fruity, spicy, floral, herbal, grassy
and buttery. They are also typically firm to semi firm, although a small minority are softer, with
a dense paste and good melting quality. They are often produced in large wheels of up to 40kg
(originally designed to aid their passage down the mountainside) and often have holes or eyes which
are formed when bacteria feeding on the lactic acid produce carbon dioxide.

So what does define this group of cheeses?
It’s all about farming methods, the quality of the pasture and cheese making, quite literally on
the hoof. The cattle are grazed using the Alpine transhumance method, that is, a seasonal droving of the
livestock between the valleys in the winter and the high mountain pastures in the summer. On their
journey the cows eat a richly diverse diet of grasses, clovers and flowering plants that is
reflected in the quality of the product. This milk is known as Haymilk it has a unique microbial
spectrum, with a lower amount of butanoic bacteria and a high amount of omega-3 fatty acids which
means it can be processed without artificial additives and preservatives, with minimal salt (salt
was a rare and heavy commodity for the early cheese makers) and at lower temperatures. Records show
cheeses like these have been produced in situ by Alpine herdsmen since the 11ᵗʰ century in cheese
making huts, found along their routes which still used by some artisanal cheesemakers today.

So how do you do your Fondue?
An amazing way to serve these cheeses is in the quintessential 70’s dinner party dish; the fondue.

Felicity Cooke of The Guardian has done all the hard work and come up with what she believes to be
the perfect version combining Emmental, Gruyere and Reblochon in which to dunk her stale cubes of
bread.

On the Stall this Week
Comte- Comte is to the French what Gruyere is to the Swiss the strongly resemble each other in both
texture and taste. Aged for between 8 and 12 months Comte is a semi- hard cheese with aromas when
young of fresh butter, dried apricots and soft caramel a with more mature example being fruitier,
spicier and nuttier.

Jarlsberg – Although not strictly an Alpine cheese this pasteurised Norwegian classic is produced
in an alpine style and is not dissimilar to Emmental. Mild and nutty with those signature holes.
It’s an excellent melter, great in a sandwich or you could even pair it alongside grated truffle in
a luxury Mac n Cheese?

Morbier- A close relative of Comte, produced from the milk of the same cattle, with its signature
line of ash Morbier is a semi soft example of an alpine cheese. It has a fresh countryside aroma
and fruity flavours with a rich and creamy texture followed by a slightly bitter after taste.