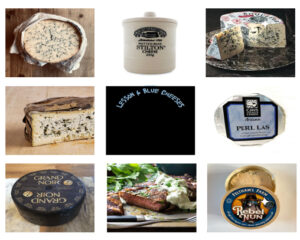 Blue cheese is a generic term used to describe cheese produced with
pasteurized cow’s, sheep’s, or goat’s milk and ripened with cultures of
the mould penicillium. Blue cheese generally has a salty, sharp flavour
with a soft and creamy or crumbly texture often with a pungent
aroma. This distinctive smell comes, either from the mould or from various
specially cultivated bacteria such as Brevibacterium linens which is also
causes smelly feet!

History
Blue cheese is thought to have been invented by accident when cheese was stored in temperature and moisture-controlled caves during the Middle Ages.
Although analysis of some ancient faeces sampled in salt mines in Austria found that miners had consumed blue cheese and beer as early as 400-800 BC.
Lesson 6 Blue Cheeses According to legend, one of the first blue cheeses, Roquefort, was discovered when a young boy, eating bread and sheeps cheese, abandoned his meal in a nearby cave after seeing a beautiful girl in the distance. When he returned
months later, the mould had transformed his cheese into Roquefort.

Production
Raw milk is pasteurised and then acidification occurs when a starter culture is added to convert lactose to lactic acid, changing the milk from liquid to solid.
Rennet is added to help coagulate the milk, and the curds are cut to release the whey. The curds are drained and formed into wheels. At this stage, Penicillium
Roqueforti is sprinkled over the cheese, and the cheese is salted to prevent spoilage. The cheese is left to age for 60 to 90 days. The cheese’s signature blue
veins are created during the early aging stage when the cheese is “spiked” with stainless steel rods to let oxygen circulate and encourage the growth of the
mould. This is also referred to as “needling.” This process softens the texture and develops the cheese’s distinctive blue flavour.

It’s not comimg home, it’s not coming home, Stiltons not coming home!
The most famous of English blues was first made in around 1720 and sold out of the Bell Inn in the village of Stilton. However, Stilton is now protected by its own Certification Trade Mark and an EU Protected Destination of Origin (PDO) which stipulates it can only be made in the counties of Leicester, Nottinghamshire and Derbyshire from local milk. Counterintuitively the village of Stilton sits within the borders of Cambridgeshire so it’s namesake cheese cannot be legally made
there!

On the Stall This Week

Perl Las- Brought to you by Welsh cheesesmakers Caws Cenarth Cheese it has a
rich creaminess followed by a short saltiness then the blue tones with a
delicate lingering flavour. As the Perl Las matures the texture becomes fudgy,
allowing the cheese to melt on the tongue. This allows a subtle increase in the
spicy lingering blue overtones.

Tuxford and Tebbut Stilton- An English classic, rich, creamy and crumbly, with
its distinctive blue veining and taste. What would Christmas be without it?
Cabrales (Picos Blue) – Unlike other Blue Cheeses the Spanish mixed milk
cheese is injected with Penicillium Cabrales. It’s strong, sharp acidic and spicy
and great paired with other strong tastes, enjoy with a glass of something very
alcoholic and very sweet or very dry.