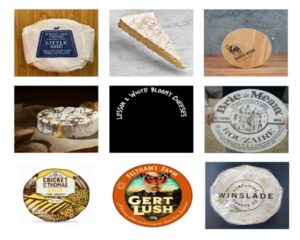 Also known as soft ripened cheeses with Brie and Camembert as their standard bearers, these perennial favourites can be produced from any milk. They have a thin white or cream coloured rind that is soft, edible and sometimes a little fuzzy. The rind is often flavourless, however if the cheese is overly ripe it can give off an unpleasant aroma and flavour that is like ammonia. Their texture is soft or semi-soft, creamy and unctuous. More mature examples might even be described as runny. In terms of flavour you can expect butter, mushroom, cream and a trace of the grass the milk was produced from.

No one really knows how these cheeses were discovered or invented. The most likely explanation is that young fresh cheeses picked up bacteria from the cellars or caves in which they were made or stored in and started to bloom. Out of curiosity, or more likely necessity, the makers ate it, discovered it tasted pleasant and it didn’t them sick, so they continued in their production and along the way refined the process.

If you consult your cheese history books you’ll find mentions of Brie going as far back as the 8th Century in France. Camembert, by comparison is a more recent creation. The first record of this cheese isn’t found until the late 18th Century, almost 1000 years later.

Although Camembert was the newer entrant into the blooming rind category of cheese, it has still managed to quickly win a place in the cheese culture of France. One reason for this was its’ portability. When compared with the steering wheel sized wheels of Brie a small disc of Camembert in its’ iconic wooden packaging fits very snugly into le shopping bags of Madame, or indeed into le sac, alongside his daily ration of 25 centilitres of vin rouge, of a WW1 soldier headed for the trenches.

The cheesemaker induces a rind to form by introducing a mould on day on of production. Most likely this will be Penicillium Candidum A.K.A Penicillium Camemberti it’s added either directly to the milk or sprayed over the formed wheel of cheese. Given the right temperature and humidity a thin white rind should have formed within 2 weeks. The cheese will begin to ripen closest to the rind first, the bacteria in combination with the enzymes from the original culture, will break down the fat an protein turning the immature firm, chalky and bland cheese into something more supple and creamy with complex aromas of, mushroom and (pushing the metaphor envelope) musty damp cellar. Interestingly once you cut into a cheese you stop it’s ripening in its’ tracks confirming the adage; Good things come……

What’s the difference between Brie and Camembert?

When it comes to their of production not a lot. Producers of both cheeses follow much the same recipe, although some Bries are enriched with cream. The size of the cheese will make some difference to the way they mature; a larger brie will take longer to mature than a Camembert and the smaller surface area of a Camembert can cause the paste to become slightly stronger. However, as with all cheeses the real difference come from the raw materials; the milk and the pasture, the scale of production and the skill of the cheesemaker.

On the Stall this week

We always have a wide selection of White Bloomy Cheeses on the stall but here are three to look out for in particular this week;

Baron Bigod- despite its relatively infancy (in terms of Brie anyway) Suffolks Fen Farm Dairy are producing what is now considered a British (some have argued international) classic. Styled on a Brie-de-meaux this raw milk cheese has a nutty and mushroomy rind with a smooth silky golden paste which, given the right amount of aging, will ooze over a delicate fresh and citrusy centre.

Little She- made in Somerset this little unpasteurised sheeps cheese starts its’ life with a mild chalkiness but as it matures it really packs a sheepy punch.

Delice des Cremiers- An indulgent and decadent example of a triple crème cheese. The cheese maker begins mixing single cream, double cream and crème fraiche. It has a delicious soft, spreadable paste, rich, velvety smooth with a slight lemon sour edge. It’s a perfect match to a glass of fizz.