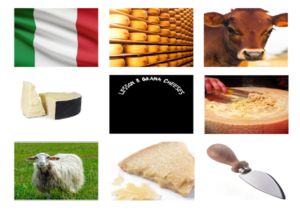 We’ve booked a return ticket to Italy this week focusing on a group of cheeses that are exclusively Italian in origin. Although there are locally made, British alternatives to the Grana cheeses; Whitelakes English Pecorino and the contradictorily named Old Winchester made by Lyburn Cheese in Salisbury spring immediately to mind, this class of cheese is dominated by three varieties; Parmigiano-Reggiano, Grana Padano and the ewes milk derived Pecorino Romano.

Grana (Italian for grainy) cheeses are hard and mature with a granular texture and are often used for grating. They have a rich, nutty flavour which becomes more intense the longer they are aged. Grana cheeses are typically made in the form of large wheels. You know that mystery almond shaped knife that’s included in your Christmas cheese knife set? It’s designed to split through the hard rind of a grana wheel next time you can afford to buy a whole one!

In Northern Italy where the landscape is more conducive to the grazing of cattle they produce their hard grating cheeses from cows milk whereas if you were to enjoy a bowl of Pasta alla Gricia in Rome it will be finished with a sprinkling of Pecorino (of sheep) Romano which has more than likely been shipped in from Sardinia where most of this cheese is now produced. Pecorino is typically aged for a shorter time than its northern cousins and although milder in taste remains sharp and salty with more mature examples still packing an impressive umami punch.

Parmesan Reggiano vs Grana Padano
Theses two cheeses are very similar in their texture, taste and application however there are subtle differences that give Parmesan the edge on the surprisingly (to this writer anyway) popular hard cheese in Italy ,Grana Padano. 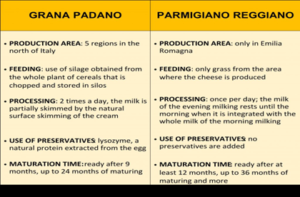 The more stringent requirements in terms of geography applied to Parmigiano Reggiano make it a more rarefied and expensive cheese to produce, the quality of the grass, fed fuller fat milk and the lack of added preservatives mean it can be aged for longer and as such produces a more robust crumblier cheese. 36 months is optimum with diminishing returns thereafter.

On the Stall this Week

36 month Aged Parmigiano-Reggiano- Crumbly and grainy with notes of spices, nuts and meat stock and an aroma of orange peel it’s a classic. A little goes a very long way, so well worth the price tag.

Sardinian Giuncato Pecorino- Aged for just 90 days it is surprisingly hard and intense it has a distinctive lamby and spicy taste it’s equally at home on a cheese board or grated into a risotto.