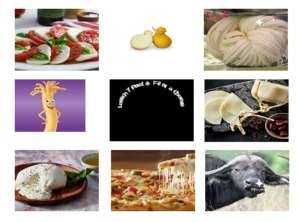 You may not have heard its collective name but you’ll certainly have come across the most famous of this group of cheeses.

Mozzarella is the world’s biggest selling cheese with global market estimated at US$37.3 Billion for the year 2022. Synonymous as pizza topping the mass produced ,aged cows milk version can feel a long way from the fresh Southern Italian Buffalo milk cheese of its origins.

Pasta Filata cheeses are almost exclusively Italian in origin. Some are soft or semisoft (like Mozzarella) and are consumed fresh or after a short period of ripening, others are semihard and undergo a longer period of ripening before consumption. With a flavour resembling sweet concentrated milk, they melt beautifully to provide that satisfying stretchy string of cheese that dangles from the chin of every pizza eater.

The cheese-making begins in the normal way. The milk is warmed and curdled and allowed to rest for an hour before the curds are cut into small pieces and the whey is drained off. The curds are allowed to rest for a number of hours.  Then follows the filatura. The curds are steeped for some hours in a bath of very hot whey, or water. When they begin to float most of the liquid is removed and the curd is mixed and kneaded until the required soft, elastic, stringy texture is obtained. The mass of curd is divided (often by pulling out a thick strand and chopping it) and shaped into individual cheeses. In the case of mozzarella the process is now essentially complete–ideally these cheeses should be eaten within a matter of a few days.
For other formaggi a pasta filata, such as Provolone or Scamorza further processing is needed: ageing, brining or smoking.

History
Early records show that the Romans were already producing a similar type of cheese from sheep’s milk by the middle of the first century AD. In the Province of Caserta, the monks at San Lorenzo Monastery in Capua used to offer bread and a cheese called mozza to worshippers during their annual pilgrimage. It is difficult to establish the particular decade or even century when this began, but the practice was already well-established by the advent of the Middle Ages.

Hanging by a (cheese) string
Armenian string cheese, also called Checil is one of the few examples of Pasta Filata cheese originating from outside of Italy. It has a ‘chicken breast’ texture and is often salted, smoked and eaten alongside a cold beer. It’s not readily available in the UK but it is produced in the same way as the somewhat bland and insipid kids lunchbox favourite the Cheese String!

Take Three ingredients
A classic way of serving Mozzarella is in a Insalate Caprese which combines the red of tomato, the green of sweet basil and the white of the cheese in a culinary representation of the Italian flag.

It only has three ingredients (excluding the dressing) but the Guardians Felicity Cloakes has managed to produce a really interesting article on how to make the perfect one.

On the stall this week
Buffalo Mozzarella (Mozzarella di Bufala)- An essential ingredient in the salad described above. Mild and milky and ever so slightly sour. Creamy and stringy when cooked there’s good reason it’s the best selling cheese the world over.

Smoked Scarmorza – Uniquely shaped as a result of being hung during the maturing stage of production. Made from pasteurised cows milk its, firmer and drier than mozzarella with a subtle smoky but sweet flavour and light caramel notes.

Burratta- Again made with cows milk this is a really luxurious cheese. The outer casing contains an indulgent combination of Stracciatella and cream. You can slice one over just about anything (Dan likes it over roasted peaches) to turn a plain dish into something really special.