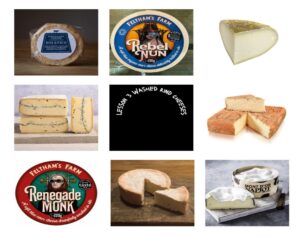 AKA smear-ripened cheeses, these are the stinkers! The classic Epoisses de Bourgogne has such a
potent aroma that French law bans its’ transportation on the Parisian public transport system.
Thankfully, the occasionally intoxicating smell of these cheeses do not always translate to the
eating. Their taste and texture can vary enormously, the soft ones tending to be the more potent
with umami notes; yeasty, deeply savoury and even meaty tones. Expect a subtler experience in the
harder examples although some of the more mature specimens can still pack a punch. But please don’t
be frightened off. There are washed rinds available for (almost) every palate (you might be
surprised that some stalwarts of the cheese cannon fall into this category) their salmon coloured
rinds and lactic funkiness are an excellent addition to any cheeseboard.
Somerset Deli School of Cheesecraft
and Gluttony Summer Term Lesson 3
Washed Rind Cheeses

History
The origins of these cheeses go back to the Benedictine monasteries of 6ᵗʰ Century Europe. Under
the auspices of the Rule of Saint Benedict which encouraged monks to live an austere and communal
life, they were not permitted to eat meat. This, along with the relative abundance of milk
available to them compared to the subsistence farmers of the time and the ordered and episodic
nature of monastic life led them to produce cheeses that could be kept for longer and who’s
production required repeated procedures. We also think this it’s no coincidence that the cheeses
they produced have a meaty, almost beefy flavours.

Production
Washed-rind cheese is exactly what it says on the tin: the rind of the cheese is washed during the
maturing process. After the cheese has been moulded and formed, it is matured. During this
maturation, the outside of the cheese is moistened (washed) gently with a damp cloth or brush,
sometimes regularly, sometimes only once or twice. The washing solution is often brine
(salt-water), but various alcohols are used instead, such as beer, cider or brandy.

This washing process changes the make-up of the cheese. Instead of moulds and bacteria that like
drier, less ammoniated and less salty conditions (like the white mould on Brie and Camembert), a
bacteria that is more tolerant to humid, ammoniated, salty conditions starts to grow on the cheese.
On washed-rind cheese, the notable bacteria is called brevibacterium linens but there are many
others. Two things typify this bacterium: its colour (orange and golden to ruby-red), and its smell
which is caused by the bacterium producing sulphur-compounds as it grows.

On the stall this week

Four to look out for this week; three British, one from Italy, two soft, two semi-soft three cow
and one goat.

Golden Cenarth- on the milder end when young but becoming strong and punchy as it matures. This
buttery organic cows milk washed rind is bathed in cider. Put a young cheese in your oven for 20
mins to bring out the gooeyness of a mature example.

Rachel- the mildest of the four featured and the only goat. As it matures it’s lightly washed in
brine which creates a pinky rind that surrounds a semi-firm cheese with a subtle and nutty
lingering flavour.

Rebel Nun- Another organic ale washed cows milk cheese hailing from just outside Wincanton. With
the bite of Epoisse; the creaminess of Camembert and with the languid blue of Dolcelatte added this
complex cheese is not for the faint hearted.

Talleggio- Semi soft and Italian this completes our quartet, it has a strong aroma, but its flavour
is comparatively mild with an unusual fruity tang. In our opinion it’s a good place to start your
washed rind adventure.