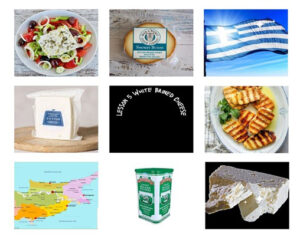 These are the everyday cheeses of the Balkans and the Eastern Mediterranean. In Bulgaria they have the crumbly Sirene, in Slovakia it’s the tangy and acidic Bryndza and when breakfasting in Turkey you’re likely to find a slice of unpasteurised Beyaz penir included amongst the olives, cucumber and eggs. However in the UK and much of the rest of the world it’s Greek Feta and Cypriot Halloumi that reign supreme. These cheeses and among the simplest and are likely not so different to the earliest cheeses made. They are produced from the milk most abundant in these areas, namely sheep or goat with cows making an appearance only very occasionally. They may be soft or hard, varying in moisture content and in colour and flavour according to the type of milk used. However, all will be rindless and generally taste clean, salty and acidic when fresh, developing some piquancy when aged and of course as their name suggests they are exclusively white.

According to Homers Odyssey. Polyphemos the Cyclops was one of the first recorded cheesemakers. On discovering his cave Odysseus describes the scene as thus; “[Polyphemos] was out shepherding, so we went insider and took stock of all we could see. His cheese racks were loaded with cheese………..his dairy, all the vessels, bowls, and milk pails into which he milked, were swimming with whey” “He [Polyphemos] curdled half the milk set it aside in wicker strainers, but the other half he poured into bowls that he might drink it for his supper”

While the poem does not mention it, both rennet and some sort of acidic starter would need to be added to transform the sheeps milk into the early stages of what we now know as Feta. Without refrigeration available and in a hot Mediterranean climate, the Cyclops would likely store his young cheese in barrels with concentrated sea water as it’s preserving agent. More than 8000 years later white brined cheese makers follow much the same process.

What’s in a name?
Both Feta (since 2012) and Halloumi (since 2021) have achieved a European Union Protected Designation of Origin status. This means that only cheeses made with certain ingredients with particular standards and most importantly made in designated areas can be called Feta or Halloumi. A special agreement between the EU and the UK is now in place to ensure that these protections remain even after Brexit.

Feta can only be produced in Greece with milk from native breeds of ewes and goats with a fat content of at least 6%. It can be raw or pasteurised but colourants, preservatives, lacto- protiens, casein salts or condensed or powdered milk are not permitted. To be called Halloumi a cheese should be produced in Cyprus with a minimum of 51% locally produced goats milk, be folded in a traditional manner and with a certain percentage of mint added.

On the stall this week

Book and Buckets Smokey Burns– Since 2021 now known as a “squeaky cheese”. Made in Dorset it’s another 100% sheeps milk cheese, cold smoked for 15 hours over oak chips damped down with scrumpy it’s an amazing grilling cheese and will work brilliantly as a vegetarian alternative to bacon.